Parents, can you spot the vapes? 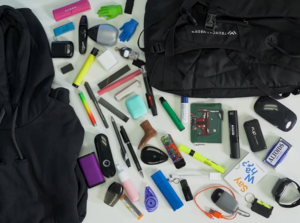 A Smoke-free Paso del Norte, which is an initiative of the Paso del Norte Health Foundation, has experienced many successes since its inception in 1999. It supported important policy adoptions like the Clean Indoor Air Ordinance adopted by the City of El Paso in 2001, which prohibited smoking indoors and since been updated to include the prohibition of smoking and vaping in outdoor public spaces like public parks. As a result of this and other community-wide efforts, smoking rates in El Paso County declined from 21% 1996 to 11% today.

Despite these successes, smoking continues to be the leading cause of preventable death and disease in the U.S. The tobacco industry aggressively markets its products and outspends tobacco prevention and control efforts by a large margin. It is important to maintain tobacco control and prevention efforts to prevent backsliding in the progress made thus far.

A new threat has emerged in the form of electronic nicotine delivery systems (ENDS) that vaporize nicotine and other products for inhalation. While the products are believed to be less dangerous than combustible tobacco products, they still cannot be considered safe. Indeed, their attractiveness and ease of use for youth is leading to a generation that is heavily dependent on nicotine and will have great difficulty quitting.

In September 2021, the FDA and Centers for Disease Control and Prevention (CDC) released findings from the 2021 National Youth Tobacco Survey (NYTS) in the Morbidity and Mortality Weekly Report “E-Cigarette Use among Middle and High School Students — United States, 2021.” More than 2 million U.S. youth currently use e-cigarettes. About 2 in 4 use e-cigarettes frequently and 1 in 4 use e-cigarettes daily.

A new, hyper-targeted campaign is underway to inform parents, schoolteachers, and community stakeholders on the importance of identifying a vaping device. In December 2021, a field test was conducted that determined if “parents could spot the vape”. Ten parents were invited to take the test and it was overwhelmingly clear that parents need to build their skills in learning how to recognize vaping devices and being able to talk to their children. It’s time for you to take the test, “Can you spot the vapes?” Click here to watch the video.

Mental health resources are available when dealing with tragedy

It is heartbreaking to hear that yet another tragedy has occurred in our country and this time less than 500 miles from El Paso.

As we grieve and reflect, memories from our community’s experiences can create the need for assistance. Below are local resources that you can turn to for help.