Over the past five years, the Boy Scouts of America (BSA) -Yucca Council and the Paso del Norte Health Foundation have teamed up to increase the participation of disconnected youth in the Scouts, adding more than 1,000 families to the Scouting family since 2013.

The Health Foundation had identified areas in the region where there are high levels of disconnected youth. Disconnected youth are identified by the Health Foundation as people between the ages of 7-18 who are not involved in an out of school program and not working. Evidence suggests that if a young person has a positive activity to go to during out of school hours, their risky behaviors decrease and they are more likely to have positive health outcomes.

Bianca De Leon, Program Officer for the IGNITE Initiative, applauds the efforts of the Yucca Council. “Volunteers and staff have taken the traditional Boy Scout model and applied it to areas in our region that do not have a legacy of scouting in their family or community. The Yucca Council offers young boys in these communities the opportunity to be involved in fun, safe, and family-centered activities that they might not otherwise have had.”

Now the two groups are working on creating sustainability for Unidos Prosperamos program by increasing the number of trained adult volunteers. Murphy says they are the “life-blood” of Scouting. “We can’t run a sustainable Scouting program without volunteers, specifically without well-trained volunteers,” Murphy said.

The BSA-Yucca Council has a goal of getting 40 percent of its unit leaders in this program fully trained for their volunteer positions. “We’ve targeted six Unidos Prosperamos units specifically to pilot a sustainability model and those units are showing good progress,” said Murphy. “We believe that by having enough well-trained adult volunteers, our units will become self-sufficient much faster, allowing our staff to move to a new area to start a new unit, thus increasing the number of families we can impact.” As Murphy likes to say, due to the partnership between the BSA-Yucca Council and the Health Foundation, “we’re making a huge impact in the communities where Scouting didn’t exist before.”

Learn more about the Unidos Prosperamos program by viewing their video. Click here. 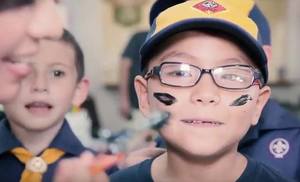