Youth and young adults are particularly vulnerable to alcohol-related consequences, including sexual assault, unplanned sexual activity, sexually transmitted diseases, unintentional injuries, and school and legal problems. The Centers for Disease Control & Prevention (CDC) estimates the cost of underage drinking, including health care, lost productivity, criminal justice, and traffic crash costs, to be $1.8 billion per year in Texas. This amount allocated based on population amounts to an economic burden of $48 million every year for El Paso. “These findings underscore that underage drinking can not only compromise the young drinker’s health and future,” Dr. David Jernigan, an associate professor at the Johns Hopkins Bloomberg School of Public Health, and the primary author of the report. “The consequences can affect the entire community.”

Dr. Jernigan has worked with hundreds of community coalitions, and served as an advisor to the World Health Organization (WHO) and the World Bank on alcohol issues. The report’s recommendations reflect findings from the WHO that among the most effective and cost-effective ways to reduce alcohol problems is by looking at how alcohol is made available in communities. Similarly, the Institute of Medicine has called underage drinking “a collective responsibility,” and emphasized how important it is that adults understand and take meaningful actions to prevent it.

“Underage drinking is a community problem, and to keep our kids safe and healthy we need to focus on community solutions, in addition to getting help to families and individuals struggling with alcohol problems,” says Jana Renner, Associate Program Officer at the Foundation. “That’s why the Health Foundation is focusing on strategies, such as a social host ordinance limiting underage drinking parties, that support youth, parents and law enforcement to reduce the riskiest drinking.”

The report emphasizes that communities create and control the environments in which young people learn about alcohol and are at risk for alcohol-related problems, and that enacting and enforcing policies that limit the social and retail availability of alcohol to young people needs to be part of how communities respond. According to Renner, “Evidence has shown that community-based strategies can help reduce underage drinking and associated harms. It is our hope that Underage Drinking: A Status Report will help inform and improve our local efforts to reduce the burden youth and communities experience because of underage drinking.” 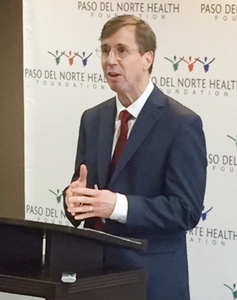