The Paso del Norte Health Foundation and New Mexico State University’s Crimson Research Center engaged in a collaborative partnership with Otero County leaders in 2016. Now in the second year of this effort, Otero County is embracing evidence-based trainings that contribute to reduction of negative bias associated with mental illness.

Jeanette Borunda, director of clinical services in behavioral medicine at Gerald Champion Regional Medical Center (GCRMC), completed Mental Health First Aid (MHFA) instructor training offered by Crimson Research. The MHFA program is recognized by the Substance Abuse and Mental Health Administration (SAMSHA) in the National registry of evidence-based programs and practices. The program is designed to help individuals learn how to respond to those who are experiencing one or more acute mental health crises and has been shown to contribute to the reduction of mental illness associated stigma.

“GCRMC sees the value of this training, so we can start to pull back our support,” says Crimson Research Associate Director Michèle J. Banner, Ph.D. “We anticipate that the hospital will continue to hold monthly trainings after our support ends, making the program sustainable after the grant is over.”

“It’s worth mentioning,” Banner added, “that Ms. Borunda has already had feedback from participants relating the training to situations in which they have been able to offer help. For instance, recognizing after training, that someone is affected by mental illness whereas before they were unsure, or unaware of how to approach the individual and offer help.”

It’s that type of feedback that helps Crimson Research see the value of its efforts to reduce the negative bias surrounding mental illness in Otero County.

Crimson Research is now working on training an additional employee from other hospitals with MHFA instructor certification, so they can co-train along with Borunda and give Gerald Champion Regional Medical Center two in-house instructors.

“GCRMA already facilitates Crisis Prevention Institute Non-Violent Crisis Training every month. Now with MHFA, they can offer a complementary skill set that benefit any employee,” says Banner. “Having two in-house instructors will contribute to this sustainability.”

The Health Foundation’s grant to Crimson Research, under the Think.Change initiative, has supported MHFA training for 110 individuals across Otero County. Of those trained, 47 came from the healthcare sector, and 29 from schools and youth related organizations. Six were first responders from the Otero County Sheriff’s Office and Alamogordo Police Department, three were from the Otero County Detention Center, three from judiciary, and 22 participants were community members.

“This work could not be completed without the partnership with Paso del Norte Health Foundation,” Banner says. “The agencies involved, particularly law enforcement, schools, and detention center, simply do not have the resources to send out employees to become instructors for mental health trainings.”

Other components of the Crimson Research 2018 project include expanding MHFA training to individuals working with youth and with veterans. Crimson Research will also collaborate with local leaders to help implement a Crisis Intervention Team program.

For more information on the Think.Change Initiative or the New Mexico State University’s Crimson Research Center grant, contact Enrique Mata at 915-218-2617 or emata@pdnhf.org.

Photo caption: Officer James Watts, left, of the Alamogordo Police Department, looks in on a scenario-based training exercise in which Isaac Lucero, an actor with MoBu Creative, plays the part of a college student contemplating suicide. The scenario-based training exercises comprised the final day of the 40-hour CIT training held in Alamogordo this past November. The training was led by officers from the Las Cruces Police Department who donated their time to lead the training. MoBu Creative is a professional acting company led by Monica Mojica that provides reality-based training for those in law enforcement and service industries. 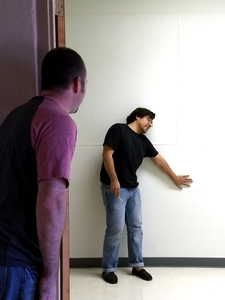