On December 6th, the City Council of El Paso became the first city in Texas to adopt a civil Social Host Ordinance that will hold adults accountable for providing an environment where underage parties take place. This ordinance will provide law enforcement with an additional mechanism that will help prevent some of these parties and will help them hold people accountable when they do happen. The intent of the ordinance is to protect public health and safety, and it will work well as a community preventive strategy.

Alcohol is the leading drug among El Paso young people, according to a new report from the Paso del Norte Health Foundation. According to the report, Underage Drinking in El Paso - A status report, 56% of 12th graders and 30% of 9th graders said that alcohol was at “most or all of the parties they attend”.

Youth and young adults are particularly vulnerable to alcohol-related consequences, including sexual assault, unplanned sexual activity, sexually transmitted diseases, unintentional injuries, and school and legal problems. The Centers for Disease Control and Prevention estimates the cost of underage drinking in Texas to be $1.8 billion per year. If allocated based on population, the city of El Paso’s share of this amounts to nearly $48 million in healthcare, lost productivity, criminal justice, and traffic crash costs.

The ordinance will take effect in 180 days. The Alcohol Impact Network will be working with other community agencies and organizations to educate the community about the ordinance. 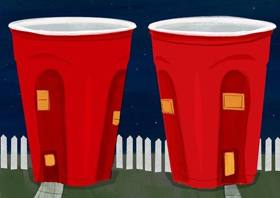