Thanks to the record-breaking generosity of El Pasoans, this year’s El Paso Giving Day lifted nonprofit organizations around the region well-above their $300,000 fundraising goal.

That goal was met in the early evening hours on El Paso Giving Day, November 15. By the time all donations were in at midnight and donations, including corporate matches, were tallied the final tally came in at more than $402,000 raised.

“El Pasoans showed the power of what our community can do when we work together toward a common goal,” said Tracy Yellen, CEO of the Paso del Norte Foundation which launched the region’s first ever communitywide, 24-hour charitable giving drive three years ago. “Simply put, more El Pasoans gave more; that means the diverse array of non-profit organizations which participate in El Paso Giving Day can undertake even more meaningful work with a broader base of support from across the region.”

More than 2,747 individual donors gave an average of $123 to the more than 200 trusted nonprofits, which make up the Paso del Norte Foundation’s Community of Philanthropy.

El Paso Giving Day seeks to engage the next generation of philanthropists through its robust social media campaigns, user-friendly online donation platform and by requiring a minimum donation of only $10.

Through the generous support of The Meadows Foundation, Gannett Foundation and Bank of America, the Paso del Norte Foundation offered ten “Power Hour” prizes to non-profit organizations which excelled at hourly fundraising goals throughout the day. Those bonus prizes range from $1,000 to $1,500. Prizes also went to non-profit organizations, which excelled during the weeklong period of early giving which ended on November 14. For more information on winners of those and other bonus prizes, visit elpasogivinday.org/prizes. 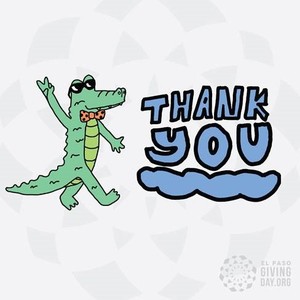