Eat your veggies, get a prize? It works

Can children in middle school learn to eat their fruits and vegetables? Students at Hillcrest Middle School, Rio Bravo Middle School, and Valley View Middle School were put to the test as part of a project coordinated by New Mexico State University, Ysleta Independent School District, and the Paso del Norte Health Foundation.

The goal to increase fruit and vegetable consumption was set using techniques originating from a classical learning theory that reinforces and rewards healthy behaviors through deployment of small monetary incentives and through health-related messages during the lunch period.

“Social settings, such as cafeterias, are excellent environments to accelerate the learning process and lower the cost of the interventions,” said Mihai Niculescu, associate professor at New Mexico State University.

So far, the benefits of randomly rewarding students include the “intervention” receiving extensive attention from everyone without the need to reward each student individually. A series of random rewards also created social desirability around good eating habits, since the outcome benefited not only the person who got the monetary reward, but also students who followed the same behavior.

“We found that motivating not only the student, but his friends as well, increases the acceptability of the intervention within the peer group, and ultimately increases the chance of adopting a new behavior,” Niculescu said. 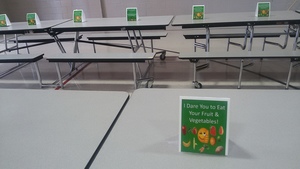