Downtown 10 and Deck Plaza to be a community project

A couple of years ago a group of individuals, businesses, elected officials, and service organizations came together to form the El Paso Mobility Coalition (EMCO). The organization is housed within the El Paso Chamber of Commerce. The stated goals and objectives of the coalition are to advance and support transportation initiatives in the El Paso region. One of the roadways that has risen to the top of the list of needs is the I-10 Corridor, El Paso’s major throughway and connector.

Some facts about I-10 in downtown:

This downtown segment, called Downtown 10, is currently being evaluated as a potential project between Executive Center and Copia Street, including where it narrows from four lanes to three, making it a choke point with increased traffic. A “do-nothing” scenario will result in significant congestion based upon traffic forecast, not only on I-10, but on all of the grid streets above, into and out of downtown. The Metropolitan Planning Organization’s (“MPO”) traffic demand model, which is approved by the Federal Highway Administration (FHWA), is the base for the Reimagine I-10 Study traffic projections that forecast traffic speeds in the downtown portion of I-10 as low as 16 mph during PM peak traffic times if nothing is done. This is unacceptable. If the planned project is completed, average traffic speed is projected to be 59 mph. As El Paso continues to grow and as we continue to lead as a domestic and international trade corridor, our community must plan and advocate for our highway corridors if we are to meet our potential. From an environmental perspective, an economic competitiveness perspective and from a quality of life perspective, this project should get done.

A concept that has been discussed and researched is putting a cap over I-10 through downtown to create open space park land, replete with entertainment venues and other amenities. The Deck Plaza would provide a seamless connection between downtown and the El Paso Community College, Sunset Heights, and UTEP – thus creating a more accessible and vibrant downtown.

The opportunity to dramatically change the landscape is a once-in-a-lifetime opportunity, and would be transformative for El Paso. Local transportation advocates and non-profit organizations have been at the forefront of supporting the I-10 Downtown and the Deck Plaza project. Community members visited a similar project in Downtown Dallas and heard the positive impacts to the community. The Paso del Norte Health Foundation engaged OBJ Landscape Architecture and worked with transportation stakeholders to help create a vision for the project.

In order to bring the Deck Plaza to fruition, a lot of work needs to happen in a short period of time so it can be tied to the construction timeline of the Downtown 10 Project. The environmental process has begun, and it will consider citizens’ input and review of the alternatives.

Downtown 10 is a TxDOT project, and the Deck Plaza will be a community project. This project is part of a list of priority transportation projects that have been adopted by local elected officials and members of the MPO. Recently, TXDOT released its recommendation of projects to move to construction. They are the following:

We are excited about the opportunity to add downtown I-10 as the next big project to forever change the downtown and reunite the communities through a Deck Plaza and at the same time, provide safe, reliable transportation throughout our community. 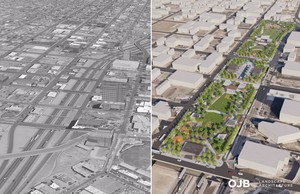